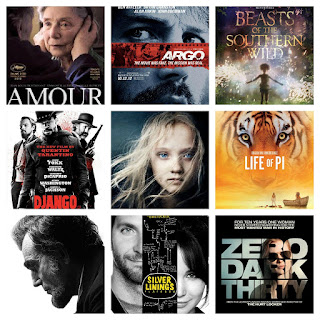 Andrew: Hello readers! All week long leading up to this Sunday's 85th Academy Awards, Sarah and I have been discussing some of the acting categories, the screenplay categories, the directing category and a couple others, but it's all been leading up to the big one - Best Picture. Remember, four years ago after many people thought Christopher Nolan's The Dark Knight got snubbed in this category, the Academy made the drastic change to up the number of nominees to 10. After two years of that, with some thinking the category was too bloated, the Academy changed the rules again so that between five and 10 films could be nominated based on first place votes. Even so, a total of nine films were nominated for Best Picture last year and we have the same number in 2013.

A: Sarah, we saw all of the nominated films except for Amour, and we follow the awards that lead up to the Oscars relatively closely. Taking everything in to account, even though there are a whopping nine nominees, which ones do you think we can whittle it down to that actually have a chance at winning?


S: There are realistically 4 movies that I think have a chance of winning: Lincoln, Argo, Silver Linings Playbook and Zero Dark Thirty. Lincoln is the historical flick with the powerhouse cast led by a two-time Oscar winner, the legacy director and maybe the best score conductor of all-time. ZDT is the gritty war movie from an Oscar-winning director who recently won for another kind of war film, but this time it's all about getting the bad-guy. Argo was the movie that had the audience on the edge of it's seat about a story that everyone thought they knew the whole story to. Silver Linings Playbook is the quirky dramady that had us laughing and crying with the characters on the screen.

It was a good year for movies! This is a tough choice! And while I think we can safely say that we miss seeing some movies in that list, it's a pretty strong list of contenders.

A: Those are exactly the four movies that I was thinking had the best chances at winning, too. The only other one I might throw in there is Life of Pi because it has the second-most nominations of any film this year, which is generally a strong indicator of support from the Academy as a whole. Some writers we follow on Twitter also seem to think Amour might have a chance, but I'd be our tax refund that it will win the Best Foreign Language Film Oscar, and I think the voters will think that's enough for it.

So, like you said, I truly do think it's down to the four you mentioned. Now, the other day The Hollywood Reporter posted a fascinating article where one of their writers was invited to sit in and listen while a director who has an Oscar vote deliberated on his ballot. One of the things that stood out to me was finding out that the method of voting for Best Picture is to rank the nominees 1 through 9, and you don't have to rank a movie if you don't want to. So this director chose to leave seven spots blank and only rank two of the films.

So how about this? Tell me how you would rank the four films you think are the true contenders and WHY, and then I'll do likewise.

S: I'm going to go with #1 as Argo. This movie really was an emotional thrill ride for the audience and I really think it deserves to win. Not only because Affleck really deserves a win in these awards but also because this was such an amazing story about our history that was kept hidden for so long!

#2 goes to Lincoln, and not because I want it to win, I just think it has a really high chance of winning. It has the pedigree that the Academy loves. It really is a pretty inspiring story at it's core, it was just way too long and pretty dull for me.

#3 goes to Zero Dark Thirty. This controversial film really had the critics buzzing this year and really had a fantastic cast. The film shed light on a story that the entire world has wanted to know and put the Hollywood touch on it.

#4 goes to the little movie that could, Silver Linings Playbook. This ensemble cast kicked butt delivering a story that touched so many people. I think because it was such a strong cast that it gained as much attention as it did. I really can't pin the lead on any one person because without every single one, the concept would have failed.

A: I'm going to put Argo at #1 as well. While I may have only ranked it as my fifth favorite movie of 2012 and I still don't think it's the BEST movie of the year, it's a pretty damn good one and it's the best of the nominees. It had me on the edge of my seat pretty much the entire movie, but it toed the line between being serious and funny very well. A strong cast led by strong direction from Affleck makes this one of the best overall movies and gets my vote in this category.

I also put it at #1 because it's been racking up all the awards this season - the SAG, the Producer's Guild, the Golden Globes and the BAFTAs all deemed it the best picture, and Affleck even won the Director's Guild award despite not getting recognized in the directing category for the Oscars. It has all the momentum, so it'll be tough to beat.

I'll put Lincoln at #2 solely because it has the most nominations this year, it has a large and very good cast led by Daniel Day-Lewis, it looks great because of some pretty good cinematography by Janusz Kaminski, and of course Steven Spielberg did a fine enough job directing it. Yes, it's not our favorite of the year, but Hollywood and the older crowd certainly seemed to like it a lot.

I'm going to put Silver Linings Playbook at my #3 because it tied with Les Miserables for the third-most nominations (8), and most of those came in the major categories. It got one in each of the acting categories, so it shows the acting branch liked it; it got an adapted screenplay nod, so the writer's are in somewhat; and of course it's nominated in this category so there's a contingent of some size that gave it first-place votes when nominating films.

Then I'll put Zero Dark Thirty at my #4, and that's more because even though Kathryn Bigelow didn't get a director nod, it still has chances to win awards like Original Screenplay, Sound Editing and Film Editing, which could possibly show love is spilling over from this category. I know at the very least the director who let THR listen in on his voting process voted ZDT as his #1.

So all of this said, Sarah, who do you think is GOING to win?

S: I'm going to give this one to Argo. It really hit all the points that movie-goers want in a movie: action, tension, heart, and a climax that had us all on the edge of our seats. I know I keep saying that but seriously, there were three of us in the group squirming and hovering over the edge of our seats. The acting was superb and the directing was impressive. To me, it's the best movie on this list and deserves all the accolades it has received and is sure to receive.

A: Couldn't have said it better myself. It has all the momentum going for it, and unless there's a vicious amount of backlash against it that lets Lincoln or something else overtake it, I think Affleck will get his first Oscar since he and Matt Damon won for Best Original Screenplay in 1997. (Oh, and George Clooney will get one, too, because he's one of the film's producers!)

Okay readers, that's the end of our analysis for the big categories for Sunday's Oscars! But now, listed below, are our FULL predictions for how we think the awards will shake up. So we'll see how Sarah and I fare Sunday night, and don't forget that we'll be LIVE-BLOGGING the Oscars with running commentary and analysis during the show. Hope to see you there!