Who Knew a Zombie Movie Could Have So Much Heart?: Our Review of "Warm Bodies" (2013) 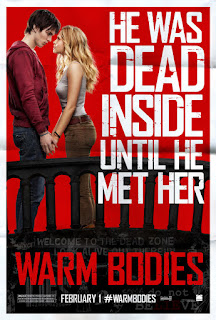 Rating: PG-13 for zombie violence and some language

Synopsis: R (Hoult) is a zombie who spends his days lumbering around an airport with other zombies, thinking internally about his existence as a zombie. While on a mission to feed one day, R and his pack attack a group of humans that includes the beautiful Julie (Palmer) and her boyfriend, Perry (Franco). When R eats Perry's brains he inherits Perry's memories and begins to fall in love with Julie...possibly turning human again in the process.

Andrew: Hello readers! Last night Sarah and I finally got off of our lazy butts (relatively speaking) and hit up the theatre to see this past weekend’s new zombie romantic comedy…

Sarah: Also known as a zom-rom-com…

A: …a very apt description for the movie Warm Bodies, starring Nicholas Hoult (X-Men: First Class), Teresa Palmer (Take Me Home Tonight) and Rob Corddry (Hot Tub Time Machine). This was a film that we didn’t see a whole lot of promotion for though we had seen the trailer before a few times and it looked silly, the kind of film that made us go, “Eh…maybe we’ll see it, maybe we won’t.”

But it’s that time of year, the doldrums of winter when studios generally dump the movies they have no hope for into theatres right before the Oscars (a term that Grantland has dubbed “Dumpuary,” which I love) so we went to the theatre because we’ve been slacking on the blog and didn’t really have high hopes for this movie. But now that we’ve seen Warm Bodies, Sarah, what did you think of it?


S: I really liked it! It was very cute. Normally I don’t like zombie movies, they tend to freak me out a bit, but they successfully managed to give a zombie movies some heart. They brought humor to it and kept it really cute and light. I really enjoyed it. I was very entertained, which hasn’t happened a lot during the past month of so at the theatre.

Generally, when you genuinely care about the characters and the proceedings like I did with this movie, that’s a good thing. So yeah…it was really cute. What did you think?

A: I was pleasantly surprised at how much I liked this movie. Right from the get-go when they introduce Hoult’s zombie character, named R, and he spoke to the audience through an inner monologue and was making observations about what it’s like to be a zombie and what the world was like now, they were lampooning the zombie genre and they had me.

I thought Hoult did a fantastic job as R, this love-stricken zombie. His mannerisms, his inner monologue, his delivery, his ability to make these one or two word sentences as he slowly turns more human…he was just perfectly cast because you cared about him and he was warm.

So, you know, I liked it because of the zombie humor, but I also liked the relationship between him and Teresa Palmer’s Julie. I thought they did a really nice job building up their relationship. It was a little contrived at the beginning, but whatever, suspension of disbelief and all that. So as their friendship grew I thought they did a good job taking their time introducing these two characters. It was really cute to watch them grow, and it was funny…I don’t know…

S: Yeah, there was just something about this movie that kind of grabs you and holds you throughout. It was funny! I think the humor is what had me the most. His inner monologue is hilarious! Because his inner monologue is just like a normal guy, you know? And he’s struggling with the reality that he has to eat human brains to survive and he feels guilty about it…

So you’re introduced to what culture usually thinks of as the bad guys, these zombies, but they’re really not. And when you finally realize what the heck is really going on…it was a little too much of a statement for me, like how humanity stopped having real relationships with each other? That irked me just a little bit, but I got it. I mean, I get it and it makes sense in this technological world that we live in, but it was a little too kitschy and cute. That said, I liked the movie.

A: I liked her! I liked her when she was in Take Me Home Tonight, she was the girl in that…

S: Oh my gosh, she is! She’s older than I thought then.

A: She’s 26, but yeah…here, first I want to touch on something about the zombies and then I’ll get back to Palmer.

Like you said, something else I liked that you just mentioned, how R felt guilty about eating brains, that was a nice little twist on the zombie genre and what everyone comes to think of zombies. Like, yeah, he felt bad about eating brains, but I liked the idea that zombies inherit or feel their victims memories and emotions when they eat their brains.

S: Yeah, that was a cool twist!

A: I just thought that was a neat little thing, and the execution of things like that were really well done.

S: They were very well done, I agree.

A: Even though Dave Franco (21 Jump Street) isn’t in the film a whole lot as Julie’s boyfriend, Perry, I think they utilized him really well in having R eat his brains and then experiencing Perry’s memories through his eyes. I thought Franco did well enough in his role, and likewise with Nicholas Hoult, to make you feel those memories. It was just really well done all around I thought, the memories thing.

S: It’s a love story where they cast the a pale guy as the love interest, a forbidden love…

A: Instead of a vampire it’s a zombie…you know…they released it on Super Bowl weekend so they were giving girls of all ages alternative programming to the big football game…I mean, the movie made over $20 million this weekend!

S: Oh it did very well, it was tops at the box office this weekend.

A: So this was all very well done and executed by all involved. Is it a great movie?

S: No! But it’s cute. And weirdly, it’s a great date movie, if that makes any sense.

A: What did you think of Rob Corddry as R’s fellow zombie, M?

S: I liked him. I think he’ s a good actor and he’s not in enough movies. He’s definitely funny so he brought a lot of humor to the film. He’s actually kind of a sad character in the film! But he’s definitely the second-most famous actor in the film…

A: I would argue he’s the most famous.

S: Next to John Malkovich (Red)?

A: Oh yeah, my bad. Forgot about him.

S: Yeah, so Corddry is the second biggest name in the movie, which means neither of the lead characters were the biggest names and I kind of liked that. I kind of like it when big-name actors aren’t the focus. So it was good casting on their part.

Now John Malkovich’s character? I know a lot of people are going to disagree with me here, and maybe it’s because I haven’t seen him in too many things yet, but I find him to be one-dimensional. I haven’t seen him in anything where he’s not being intense, and he only really has that one face…I don’t know, I know I’m going to get a lot of crap for that.

A: Well I think he did his job well enough. Malkovich plays Julie’s father, but he also happens to be a colonel and is the leader of the city the survivors all live in. I like that, even though they only say it a few times, but they explain that his wife and Julie’s mom was killed by zombies so…

S: That’s part of his prejudice against the zombies, yup.

A: But so I thought Malkovich did a good enough job expressing that. He’s always concerned about his daughter and the actions he takes are because of his love and concern for her. With a lesser actor maybe that stuff doesn’t come across as well as it did, or as sincere as it did, so I thought he did a good job.

S: Yeah, yeah. I mean, if you’re going to put big names in this movie, they did it in the right spots. I also loved seeing Analeigh Tipton, from Crazy, Stupid, Love as Julie’s best friend. I think she’s not in enough things because she’s funny and pretty. She’s not in this movie a ton but she makes the most of her scenes I think.

You know, they just did a good job with this movie. It also had some great music in it…yeah, there were a lot of things I liked about it. I thought they did a good job. I enjoyed it a lot.

A: Final thoughts on Warm Bodies, then?

S: Like I said earlier, there’s not a lot in theatres that’s really good other than the Oscar nominees. So if you’ve seen those movies and are looking for something else to watch, this is a good choice.

A: It’s one of those rare January/February movies that’s actually entertaining. Every now and then there’s a diamond in the rough that sticks out from the other crap…

S: And this one isn’t one of the crappy ones.