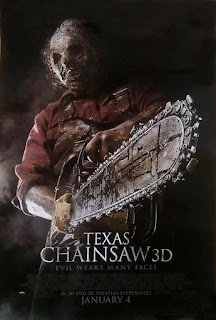 Rating: R for strong, grisly violence and language throughout

Synopsis: Just before going on a road-trip to New Orleans with her friends, Heather (Daddario) gets a mysterious letter in the mail telling her she's inherited large estate back in Texas. When they get to the estate, Heather and her friends discover a skin-mask wearing, chainsaw-wielding psychopath in the basement and all hell breaks loose.

Andrew: Hello dear readers! Sorry for the long delay between posts, but to be quite honest we’ve been quite busy with the day jobs, plus my better half was fighting a cold for most of last week and the early part of this week. But she’s all better now and I finally have some time to write this review, but first, let me introduce this new feature!

As you may know, Sarah isn’t the biggest fan of horror movies. Yes, she did love The Cabin in the Woods, but for the most part she doesn’t really like slasher flicks, haunted house movies (she even believes our apartment is haunted!), monster movies and so on. She has an active imagination and it gets the better of her when she’s asleep, so horror movies are a no-no for Mrs. Keck.

So with all of that said, I’m here to introduce the first review in our new feature – Alone In The Dark. Nothing too special here, but what this feature is going to be will be a one-man review on the horror movies I see without Sarah (hence, the "alone" part).

I haven’t quite nailed down a format that I want to write these reviews in, but for the sake of kicking things off, I asked our friend Nick of The Cinematic Katzenjammer (who helped me come up with the name for this feature) if I could borrow his "The Good, The Bad & The Ugly" review format just this one time and he gave me his blessing. So without further ado, here is my solo review of Texas Chainsaw 3D.

Alexandra Daddario: I’ll get this right out of the way, there isn’t a whole lot of good in Texas Chainsaw 3D. I’m sure that surprises all of you. But it did have some good things, lead by a fine leading turn by Alexandra Daddario (USA's White Collar) as Heather, a twenty-something girl who finds out she’s inherited a huge estate in Newt, Texas (setting of the original), and the estate happens to have Leatherface living in the basement. Daddario is certainly pretty and she fills the role of scared heroine fairly well, but it’s really more of the fact that she was apparently contractually obligated to bare her midriff at all times that most guys will appreciate.

Cinematography/Set Design:  I was a big fan of the gritty, saturated look of the The Texas Chainsaw Massacre remake starring Jessica Biel, and to an extent they tried the same look with this film. The set design works equally well in setting up at least an ominous estate that Heather inherits, setting up a realistic-looking town (including the drab interior of the sheriff's office), and the grimy, dreary meat packing plant the film's climax is set in.

The Twist: There are three people credited with writing the screenplay and three people credit with coming up for the story, so I don't know who to give props to for this, but the writers  throw a twist our way about two-thirds of the way into the movie. I shouldn't say it's a twist as in a M. Night Shyamalan twist, but rather a twist on the franchise. I won't spoil it for anyone, but the general idea of what they do is pretty neat because it's different. The execution and its effect on the characters? We'll talk about that in just a little bit. But I like the attempt at doing something different.

The Acting: Not a huge surprise, but there's not a single actor here who I expect to win an Academy Award at some point in their career. The worst acting comes from Burt Rae, who play Mayor Burt Hartman, a guy who isn't too keen on Heather showing up in town. The script does no favors for him - or anyone else for that matter - but Rae is just laughably bad. I feel bad for the guy, especially because of wig he has to wear at one point in the film.

The Gore: Probably the thing I was most disappointed with in the entire film is that, for being the newest entry in a franchise centered on a villain who uses a chainsaw to kill people, there's actually not a whole lot of chainsawing going on. Off the top of my head I count four people that Leatherface kills and only one is directly with his chainsaw, and that's the only one where the blood looks like it wasn't done with CGI. Don't get me wrong, there's definitely some brutality here, but none of it is notable.

The Nudity: In that there isn't any. I know, I know, there wasn't any in the 2003 remake with Biel either, but when the rest of this movie falls so incredibly short in every other aspect of being a horror movie, the least it can do is show some skin. Especially since it's R-rated to begin with. Daddario gets pretty darn close to showing the goods, but some creative moves with her shirt hold her back. But it's pretty disappointing when Tania Raymonde (ABC's Lost), who plays Heather's best friend and fills the "Whore" role that The Cabin in the Woods so expertly skewed, seduces one of the guys in the film but only gets down to her skivvies.

The Script: Holy crap is the dialogue in this movie terrible. Even worse are the characters' actions and motives (though that's to be expected in a horror film). But seriously, there were plenty of points in the movie that I wondered if the writers meant for the whole theatre to be laughing at their movie. There's a specific line Daddario delivers in the finale that is especially terrible. Add the dialogue with characters doing stupid things like hiding behind a small headstone in a cemetery, not one but two characters following a bloody trail into a dark basement (one of them being a sheriff's deputy at that), a couple of characters trying to lock Leatherface out of a barn by locking the wooden doors with a 2 x 4 despite Leatherface's signature weapon being a freaking chainsaw...oh I could go on. It's all so laughably bad that I'm sure this movie will be a blast to watch at home while playing drinking games.

So that's The Good, the Bad & the Ugly of Texas Chainsaw 3D. But I want to go back to the twist real quick. It puts an interesting spin on the character of Leatherface for better and for worse. Again, trying not to spoil anything here, we don't so much get a back-story on Leatherface but instead get a better idea of his motivations for what he does and what that effect has on Heather, whom we do get a back-story on. That's the part I like. The downside to that is that it humanizes Leatherface and isn't that exactly the thing we don't want from our favorite movie villains? When was the last time that worked? It didn't work in all the post-Halloween 3 films with Michael Myers (or Rob Zombie's two Halloween films), it didn't work with Hannibal Lecter in Hannibal Rising, and in a similar fashion it didn't work with Anakin Skywalker in the Star Wars prequels. All of that said, I was still entertained by Texas Chainsaw 3D and I'll be curious to see where they go with the already-announced sequel to this film. In the meantime...

FINAL VERDICT: Netflix it! (And come up with a drinking game to play while you watch!)