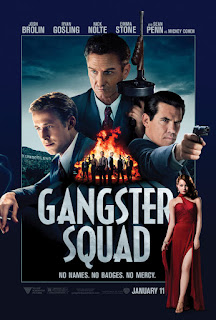 Synopsis: Sergeant John O'Mara (Brolin) has returned to the LAPD after fighting in WWII and he doesn't recognize the city he once loved now that a gangster named Mickey Cohen (Penn) has started to take control. After impressing the police chief with his brazen style and disregard for Cohen's reign, O'Mara is charged with putting together a top-secret squadron of LAPD officers to taken down Cohen's empire.

Andrew: Hello readers! Earlier this week Sarah and I were able to catch a screening of the new, star-studded action film GangsterSquad – starring Josh Brolin (Men in Black III), Ryan Gosling (Drive), Emma Stone (The Amazing Spider-Man), Sean Penn (The Tree of Life) and more. This was a movie we’ve been waiting a while for because it was originally slated to be released in 2012, but after the tragic theatre shooting in Aurora, Colorado, the film was pushed back to reshoot a climactic scene that involved a shoot-out in a movie theatre. So the film was pushed back, they reshot it, and it comes out today. So Sarah, now that we’ve seen Gangster Squad, what did you think of it?

Sarah: I love my gangster movies. I think there’s something romantic about the gangster genre, ESPECIALLY vintage gangster movies. So I was looking forward to Gangster Squad, but it ended up being a bit of stretch for me. It had its moments, I’ll give it that. It had a great cast, a phenomenal cast…but it just missed the mark for me.


A: Why did it miss the mark though?

S: This movie was cheesy as hell. The dialogue really bothered me, and I’m not sure if it’s because Josh Brolin didn’t do a great job delivering his lines…

S: Something missed between the lines that Brolin and other characters were supposed to say and how it came out of their mouths. It wasn’t good.

A: You’re absolutely right. By far the weakest aspect of this movie was the script; the dialogue. It was atrocious. The script, almost in its entirety, is not good. The entire time we were watching this movie I kept thinking, “This movie doesn’t know what it wants to be.”

S: It was so weak! Here’s the thing that bothered me – if you’re going to do a movie based on true events in the 1940s, make it feel like it’s actually taking place in the 1940s. Don’t half-ass it by giving it the feel of the 1940s and then do a whole bunch of modern things like using slow-motion. That bothered me.

What was the movie we saw recently that totally overdid the slow-motion? Because we had this same problem recently with another film, and it really bugs the crap out of me.

A: So you were bothered by…

S: I was bothered by what you said – it didn’t know what it wanted to be, which bothers me because I had high hopes for this one.

A: And what I mean by “it doesn’t know what it wants to be” is that it starts off as your generic period film set in 1940s Los Angeles where the mob is prospering and we have our good cop, played by Josh Brolin, who doesn’t play by the street rules. Speaking of which, I really liked how the movie started off, with Brolin’s Sarge busting in to the mob’s building and saving a damsel in distress. That was cool, because we get a feel for how the city is…

S: And it had this gritty, cop feel to it that was a bit refreshing.

S: The car chase when the Gangster Squad is trying to stop a heroin shipment? That stuff worked there. The final shoot-out with Sean Penn’s Mickey Cohen? Not so much.

S: And I wanted it to be that! You’re right! This movie was like the younger sibling trying to live up to the expectations set up by the older sibling. You know…they tried! They tried so hard! They had a great cast, they had great tools…

A: Well hold on, let’s talk about that, because the strongest part of the movie is the cast. Josh Brolin’s not bad, Ryan Gosling’s good, Emma Stone…she’s not really used to her fullest extent…

S: I personally don’t think Michael Pena was used to his fullest extent. He was so good in End of Watch and he has some really funny moments here, too, but I thought he was wasted.

A: Speaking of wasted, Robert Patrick (Trouble With the Curve) is awesome as Max, an LAPD officer who’s basically a cowboy and uses a six-shooter, but other than some sweet shootout moments he’s pretty much wasted and has a terribly underwritten relationship with Pena’s character, Navidad. Giovanni Ribisi (Ted) does well with what he’s given to do, and I really liked Nick Nolte (Warrior) as Chief Parker [Editor’s note: Nolte’s character is based off of real-life former LAPD Police Chief William H. Parker] and I’m bummed he wasn’t in it more.

But let’s talk about the character most people who see this movie will probably talk about the most: Sean Penn’s Mickey Cohen, based on the actual gangster of the same name. There are times where I actually really liked Penn’s Cohen but then there are times where he is far too cartoonish, and it feeds directly into my belief that the movie is trying to be something that it’s not.

S: To me, Sean Penn’s Mickey Cohen reminded me of a old timey political drawing. Just the way he looks, the way he struts…

A: Honestly he looks like he belongs in a Dick Tracy comic. Like he literally walked off the set of the old Dick Tracy movie with Warren Beatty and Madonna and plopped himself down in this movie.

S: Yes! And it bothered me that in order to set him apart as this big, bad gangster from the East Coast they felt the need to make him over the top and use a really bad accent. It totally missed the mark. Oh! And the derogatory terms that Cohen just throws around that don’t do anything for the story didn’t help matters. If you’re going to use language like that, use it for a purpose. I just felt like it was sloppy, and that goes into the dialogue again.

A: Exactly. Again, it’s the filmmakers trying to make Gangster Squad something that it’s not.

S: The more I think about it the more I realize a bunch of things in this movie really bugged me, especially Sean Penn.

A: Here’s my thing with Sean Penn: the times I liked Penn in this film is when he was playing Mickey Cohen a little downplayed. The times when he blows up? That’s what it gets laughable. But when he speaks low and is being serious, I could see him a legit gangster to take as a serious danger.

S: They needed to write him as the mob boss who just needs to nod and his henchmen will know what to do. Instead he’s the guy throwing the punches.

A: I look at the role of Mickey Cohen as being a role that a Robert De Niro or Joe Pesci would have knocked out of the park years ago. This is the kind of role that requires an actor like them, where if he blows his lid, you know damn well he’s not to be trifled with. I didn’t get that with Sean Penn.

S: Yes! I totally could have seen James Gandolfini in a role like this. But whatever. While we were watching this, it seemed like you were enjoying it a little bit more than I was.

A: I mean…there were things that I did like about it. I like the general idea. I liked when they were putting the team together and I especially love that it was Sarge’s wife, Connie, played by Marielle Enos (AMC's The Killing), who chooses whom Sarge will pick for his new squad, and I really liked the scene where she comes straight out and tells Gosling’s Jerry that she had chosen him for the squad, like it was no big deal. I liked that.

I liked watching the squad go around and bust some stuff up, particularly when they bust into Mickey Cohen’s prized money-making scheme and they’re tossing shotguns to one another. That was pretty cool.

S: I agree! Those scenes got our blood pumping, like, “Yeah, here we go!”

A: But then it would switch back to Mickey Cohen or something that Brolin’s character would do would bring the film to a screeching halt. A lot of that is because a lot of this movie felt forced.

You know, here’s an example of what the movie could have been: right at the start of the movie Mickey Cohen has a member of the Chicago mafia killed in a really gruesome way that fans of the classic horror movie The Hitcher might be familiar with. It sent a message to me and I thought, “Alright! Maybe this movie will be something I wasn’t expecting!” But then it couldn’t deliver on that promise.

S: And there are a couple of moments like that, where they use some extreme violence – and in creative ways, I’ll give them – but it didn’t deliver. It was supposed to be impactful but it never really is and I questioned whether it was necessary. Because I don’t think it was.

A: I never thought it was unnecessary…

S: I think it was how they used it. Because of the way they integrate this extreme violence into a film that, for the most part outside of those moments, is pretty lax. It just didn’t fit. Overall, Gangster Squad was trying to be something it isn’t, therefore it missed the mark. I was disappointed because I wanted this to be good.

A: I was disappointed, too. I was actually most disappointed because this is directed by Ruben Fleischer, who made the awesome Zombieland.

S: That is very disappointing. Is it entertaining? Sure, I’ll give it that. Ryan Gosling is gorgeous per usual and he makes all women want to be with him still, so…bravo for Emma Stone for getting to continually act as his romantic interest.

A: It’s entertaining, but is it entertaining enough to go spend your hard-earned dollars to see it in theatres?

A: It wouldn’t be a terrible matinee on a Saturday afternoon, but with the current crop of movies in theatres because its award season, you can probably take a pass on it until it’s on home media. Oh! And not to keep kicking a dead horse, but there’s a character who dies, and how TERRIBLE is his or her death scene?

S: Oh my gosh it’s awful! It gives Marion Cotillard’s Miranda Tate a run for her money. Seriously, you could put them side by side and it would be a toss-up. That’s the kind of movie you’re dealing with here with Gangster Squad.