Sopranos Creator's Directorial Debut Doesn't Do Much For Us: Our Review of "Not Fade Away" (2012) 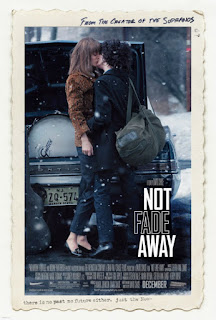 Directed By: David Chase (The Sopranos)

Rating: R for pervasive language, some drug use and sexual content

Synopsis: Set during the mid-1960's, Doug (Magaro) and his friends put together a band to try and make it big like. All the while they must deal with in-band jealousies and decisions, girl problems and parents that just don't understand.

Andrew: Hello readers! The other night Sarah and I were privy to an advance screening of a film called Not Fade Away that was written and directed by David Chase, best known for being the creator of the hit HBO series The Sopranos. Starring John Magaro (My Soul to Take), Jack Huston (HBO’s Boardwalk Empire) and James Gandolfini (Killing Them Softly), this was a film that we didn’t know a whole lot about going into it. We only really saw a poster for it when we were in New York City on Christmas Day, we saw who it was directed by and it sort of piqued our interest.

Turns out it’s about a group of young guys in 1960’s New Jersey who start a band trying to go big, and the trials and tribulations of band dynamics, dealing with love, dealing with family and so on. It focuses mostly on Magaro’s character, Doug, the band's drummer and back-up vocalist, and Huston’s Gene, the lead singer and lead guitarist.

We legitimately didn't even know those basics going in to it. We went in relatively green, I'd say. But now that we’ve seen it, Sarah, what did you think of Not Fade Away?

Sarah: I thought it was just okay. I found it interesting that it seemed to be more of a character study on people of a certain generation – of kids, teenagers and their families in the mid-1960s, who were really kind of there when these big waves in rock ‘n roll history started hitting. You had The Beatles and The Rolling Stones and just tons of new bands hitting the scene, and everyone wanted to get famous being a musician.

So it was an interesting look at this particular group of Jersey boys who want to start a band. And really, having been friends with guys who were in a band at one point in my life, I found it interesting because it’s still pretty similar to today and how kids were really no different then than they are now.

A: When you say it’s pretty similar between then and now, do you mean in regards to the band dynamics?

S: Yeah, the dynamics of a band haven’t really changed. And especially a band like this one, where you have a member who might actually go on to do something in music and maybe has some success, but in most cases it usually dies out and everyone goes their separate ways.

I just found that pretty interesting. Especially because nowadays there isn’t really one band or a group of famous bands that budding musicians aspire to be like. Whereas back then it looked like everyone wanted to be the next Beatles, the next Stones, the next The Who.

So THAT was interesting to me. Other than that, it was just okay. It was more interesting than it was good, does that make sense?

S: What did you think?

A: I think you’re spot on that it was an interesting look at what I would assume is a realistic portrayal of what it was like to be a teenager or post-high school student living in the mid-60’s. You had a lot of things shaping these kids. There was war, there was the Kennedy assassination…

S: It was the budding era of drug usage…

A: Yeah, all of those things were happening. So I thought it was an interesting look at the life of Doug and how he wanted to make a living as a musical artist. His dad, played by Gandolfini…

A: And who thinks that Doug looks like a hippie, or more accurately he says a number of times that Doug, “looks like he just got off the boat at Ellis Island.”

A: Yup, and along with not liking how he dresses or looks, he obviously doesn’t care for Doug quitting college to focus on music, just all those sort of cliché things. It’s just a neat look into the generational rift between the Baby Boomers and their parents.

Like you were saying, the dynamics between band members was interesting to me as well. You’ve got Gene, played by Jack Huston – a personal favorite of ours because of his awesome role of Richard on Boardwalk Empire – and Gene is the lead singer and most musically adept member of the band. But he gets upstaged by Doug one night during a gig when Gene knocks himself out of commission due to a marijuana joint mishap and Doug ends up taking lead vocals for the night.

From there the main dissonance in the band is that Doug has a more bluesy voice than Gene, and Doug wants to write his own songs whereas Gene wants to stick with covers until they’re a little more well-known. I was interested in that dynamic and who the other members of the band sided with.

Likewise, I was NOT so interested in Doug’s little romance with a girl named Grace, played by Bella Heathcote (Dark Shadows)…

S: Which is too bad, because other than Jack Huston and Gandolfini, I’d say she’s probably the most recognizable of the kids in the film. I felt her character was wholly unnecessary, to be honest.

A: I don’t think she was unnecessary, because it was another aspect of Doug and that time period that Chase was trying to show.

S: Well…I really saw her as a groupie and that bugged me.

A: I didn’t really think she was a groupie. I’d say she was more of a front-runner.

S: Remember she was hooking up with most of the band in high school and then at the end she disappears and it’s alluded to that she disappears with a very famous rock star.

A: Again, I wouldn’t say she’s a groupie, I’d say she’s a front-runner, just because when she was in high school she was dating the jock, then right after high school she hooks up with Gene and the band’s other guitarist, Wells [Editor’s note: Wells is played by someone we’ve never heard of named Will Brill], and then once it becomes apparent that Doug is the heart and soul of the band she starts to gravitate towards him. That’s not so much a groupie…

Regardless, I’m sure that her portrayal of Grace might have been what girls were like back then, but the chemistry between Heathcote and Magaro was lacking for me. It was sort of an interesting dynamic, how Doug was so in love yet emotionally jealous at times, and how their relationship was impacted by his career decisions. But their story itself was boring. Dynamics are one thing, story is another. And that’s the big thing to me: I agree with you, the story? I wasn’t so interested in it when all was said and done.

Parts of it are interesting, the dynamics between the band and the family dynamics in Doug’s and Bella’s homes was interesting, but I was interested the most by the fact that we were by FAR the youngest people in the theatre. EVERYBODY else was 40 and above. It was definitely an older skewing crowd, most of whom very clearly lived during that time period. They were laughing at a lot of situational things that must have hit home with them or reminded them of those years in their lives.

S: Maybe it was also because this movie was about kids in Jersey, which might hit close to home for people in the tri-state area. It might have reminded them of their own families. Families out here on the East Coast are a tougher people in a certain way, and I think this crowd could relate to Doug’s family and his relationship with his dad.

A: Whereas we, being in our mid-twenties and hailing from the Midwest...it just didn’t connect with us too well.

A: There are some other aspects of the movie that weren’t too great either, like a couple of particular CGI scenes were pretty rough. I wasn’t too hot on the script and some of the acting isn’t top notch.

But other than that, the music is great. They use a mix of a classic rock songs from those famous bands we’ve mentioned, as well as some songs that I’d have to imagine are original to the film that Doug’s band sings. I also think the actors played their own instruments and sang their own vocals. They weren’t the strongest vocals, but that was sort of the idea.

S: Yeah, and for the time period it fit, too. The kind of music that was popular back then didn’t always need strong vocals.

A: But you know what? I really, really liked the set design and the costumes. Those things felt really accurate to the time period.

S: Especially for an independent film like this it was pretty well done.

A: Not once did I ever think the film didn’t look like it took place in the 1960’s. It was all pretty credible looking. The movie also had a relatively strong supporting cast with Gandolfini…Brad Garrett shows up briefly as a potential band manager…

S: I’ve seen the actress who plays Doug’s mom in a lot of TV shows in guest roles. I thought she did a good job here.

A: And Christopher McDonald (Shooter McGavin!) pops up as Grace’s rich father.

A: I actually disagree with you here! I think this is best I’ve seen from Gandolfini in a long time because he DOESN’T play Tony Soprano.

S: Oh I think he plays Tony Soprano for sure.

A: Well I think he doesn’t…

A: Well you’re going to see Tony Soprano in this role because it’s James Gandolfini. Tony Soprano was such an iconic role that it’s become the kind of role that’s tough to separate the actor from that character now. But things like Gandolfini running to a car as Doug is leaving to move across the country and giving him some money, or that heart-to-heart dinner scene between the two of them?

S: Okay, yeah, I’ll give you those. He had a couple of scenes. But when he’s angry at Doug and threatening that they’re gonna come to blows? That’s what I mean.

A: But that’s also just who Gandolfini is, and that’s what I mean by it’s tough to separate the actor from his most famous character. That happens with stars sometimes.

Okay, so overall I enjoyed Not Fade Away, and I was never bored until the very end.

S: Oh yeah, I was definitely bored by the end.

A: For the most part I was just enjoying the music and watching the dynamics, like we’ve been saying. I was curious to see where the movie was going to go. But it does meander at times, the pacing is a little off…but in general I liked the cast even if they weren’t always the strongest.

I can’t say that David Cross directed it really well, per se, but he didn’t direct it poorly.

S: It didn’t impress me very much.

A: I wouldn’t shout from the rooftops to go see this movie…

S: And I wouldn’t say it in a casual conversation either.

A: But if you’re from that generation? If you’re a baby boomer? Then I might suggest going to check it out because you might some more enjoyment out of it than we did.