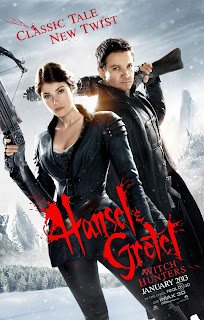 Synopsis: A re-imagining of the classic Brothers Grimm tale, years after escaping from the clutches of a witch when they were children, Hansel and Gretel (Renner and Arterton) have grown up to become professional witch hunters. When a city hit by a particularly bad rash of kidnapping by local witches hire the siblings, they wind up discovering more about the events that led up to their original witch encounter as children.

Andrew: Hello readers! So Sarah and I had pushed off seeing Hansel & Gretel: Witch Hunters off far enough and finally caught it at our local AMC last night. The film is a new spin on the old Brothers Grimm tale, starring Jeremy Renner (The Avengers) and Gemma Arterton (Quantum of Solace) in the title roles, with Famke Janssen (Taken 2) playing the head witch they are hunting. Now, this wasn’t a film that we thought, “Oh man we NEED to see that!” But it was one that piqued my interest…

Sarah: It definitely looked entertaining in a totally cheesy way.

A: Exactly. So now that we’ve seen Hansel & Gretel: Witch Hunters, Sarah, what did you think of it?

S: I thought that it was entertaining! It had a lot of action and some over-the-top gore and blood and guts. And it totally maintained its R rating with that violence and with the language. It was very much like The Brothers Grimm movie that starred Matt Damon and Heath Ledger mixed with the Van Helsing movie with Kate Beckinsale and Hugh Jackman. I loved it because of that. It was fun and entertaining and over-the-top silly. It’s been a while since we’ve been entertained at the movie theatre, and this one certainly entertained me. I didn’t have to think too hard. And I wasn’t repulsed by the gore or anything, so that was good.

So yeah, it was entertaining but not a whole lot more than that. What did you think?


A: You’re absolutely right, the best thing that can be said about it is that it’s entertaining. It’s certainly not a movie you go into expecting it to be serious, much like Abraham Lincoln: Vampire Hunter. This is just has a title that is just as tongue-in-cheek as that one, and we had almost as much fun watching this movie as we did watching Abe cut down bloodsuckers.

A: Everyone going along with it was pretty helpful in digesting the movie. Gemma definitely seemed to go with it, and she was really the star of the movie…well, they have equal billing but with the dynamic between her and Renner’s characters it seemed like she was the leader of the two...

A: Exactly. But I enjoyed watching Gemma play it up. You could see a light in her eyes sometimes which helped in digesting the ridiculousness of the movie. But yeah, I found this movie to be entertaining, too! I thought it was a good move to make it an R-rated film. I know they filmed it in the way that it’s presented, but I know they also did toy around with the idea of trimming it down to get a PG-13 rating.

S: Like cutting out the language and the gore?

A: Yeah. I don’t think it would have been as fun if it had been PG-13. I sort of got a kick out of it being just a fun, over-the-top action movie that reminded me just bit of movies like Rambo or Die Hard. Now I’m obviously not saying it’s in the same class as those movies, just that it was a fun shoot ‘em up film like those could be. It has mindless violence, some language in there, like you said we could turn our brains off and just veg out with our candy…and I fully expect this to be one of those movies that FX buys so it can play on a continuous loop along with Van Helsing.

A: Exactly! It’ll become one of those movies that when you stumble across it on TV you’ll go, “Oh yeah!”, put down the remote and just check out for a while. I thought it was a neat spin on the tale. It didn’t bring anything special…

S: Nooo it didn’t. It was funny though! There were funny parts that were meant to be funny. It’s not like we were laughing at it because it was so dumb. No, we were laughing because they wanted you to laugh.

A: The one thing I was laughing at was that these two are supposed to be these elite witch hunters, and the opening credits is a cool animated thing showing all these old-timey newspaper clippings extolling their witch hunting prowess, but when we finally meet them and they’re hunting down witches…from what you see…you’d be surprised that they’re supposed to be so great because they get their asses HANDED to them time and time again.

S: (laughs) They get beat to hell A LOT in this movie.

A: Time and time again they’re getting the crap beat out of them. It’s like, if it weren’t for the fact that there are two of you, you probably would’ve been dead a long time ago.

S: Seriously! And, you know, it’s like…if it weren’t for the fact the witches don’t have much of an effect on them other than being able to kick their asses physically, they probably would’ve been dead a long time ago.

Also, the fact that Hansel & Gretel is a German story and Renner and Arterton clearly speak using an American accent and are wielding these very contemporary machine guns?

A: I actually liked that about the movie (laughs).

S: I liked it too! This was totally in the vein of other movies like that. Like…something just doesn’t fit, like the sterling silver rifles and Gatling guns. The technology is just silly and it’s meant to be silly. And Hansel is diabetic! I thought it was too funny that they made Hansel diabetic because of all the candy he ate as a kid.

A: I thought that was actually a pretty neat little thing to give his character, because it absolutely would’ve happened if you ate that much candy (laughs).

S:  And you know, they had a pretty good villain in this movie in Famke Janssen, who plays a good, evil witch. I’ll give her that. She plays evil pretty well.

A: She was having fun with the movie. She was hamming it up. I've read some reviews saying she delivered lines in a "Shatner-esque" fashion, and that was totally cool with me.

S: Oh definitely. Though I think it was a little easier for her to ham it up.

A: I think part of that is that she had to wear a lot of makeup at times to look like this evil, gross-looking witch. She just got to have fun. But speaking of the witch makeup, I absolutely loved the creature design in this movie outside of Edward the troll.

S: And we both love creature design because of SyFy’s Face Off, but yeah – when all the witches gather in the climax and each witch has their own unique look? That was really cool. That was creative, that they took the time to come up with a different design for every witch. Even though the audience probably doesn’t know it, each witch probably has a background the filmmakers gave them, and that’s pretty cool.

A: My particular favorite was the conjoined twins witch that sword-fought with Hansel. I loved how they used the logistics of a witch having four legs and whatnot. I dunno, I just had fun with this movie with things like that. It was a fun, mindless movie. You don’t go into a movie like this expecting it to be Oscar-worthy.

S: Nor do you expect it to be terribly action heavy where you’re totally overwhelmed by everything that happened on the screen. It's over-the-top but it's not overkill, which was perfect for me.

A: Alright, then what’s our final take on Hansel & Gretel : Witch Hunters?

S: It’s by no means a great movie, but it’s a fun way to kill a Saturday afternoon or a random Monday night. You don’t need to see this one in theatres, but it’s definitely fun.

FINAL VERDICT: A fun way to kill a Saturday afternoon!