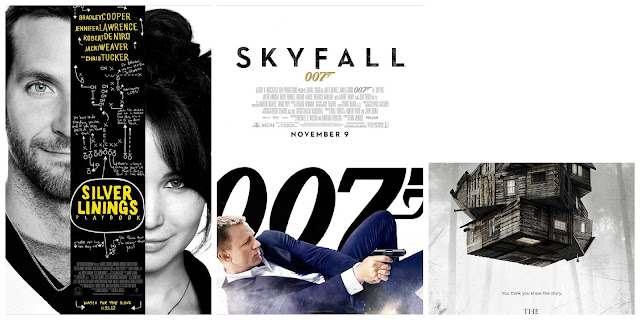 Andrew: Hello readers! First off, Happy New Year! Secondly, ymight remember that at two separate points last year we posted articles called Sarah & Andrew’s Top Ten Lists for 2012 So Far. We posted our first at the start of July and we posted our second at the start of October (so the halfway point and three-quarters point of the year). Now that 2012 has come and gone, it’s time to reveal our final lists that includes films that we saw in the final quarter of 2012! In those last three months we saw 17 new releases in the theatre, including a bunch of Oscar contenders.

So here’s the deal – just like the last two times, we have criteria for our lists: the films included have to be films we’ve actually seen and reviewed, and they had to be films that were released in theatres for public consumption in the United States during the 2012 calendar year. This means that a movie like Zero Dark Thirty, which doesn’t get a wide release in the USA until January 11th, would qualify because it’s been playing in cities like New York for a couple of weeks. Again, these are from among all the movies we've seen and reviewed this year, so if a movie isn't on this list, it's possible we just didn't get around to seeing it.

And one last thing: because I personally found that each of our last two Top Ten Lists were a little lengthy, we’re splitting them up into two different posts. And at the bottom of each post will be the other’s BOTTOM five of the year (the post headline kinda gave that away though, didn’t it?). So check out my personal Top Ten List for 2012 and Sarah’s Bottom Five of 2012 after the jump!


10.) 21 Jump Street: The best studio comedy of the year led by Channing Tatum’s hilarious turn and Jonah Hill’s superb comedic timing. These two were a perfect match for one another. The fact that it’s an R-rated buddy cop movie doesn’t hurt either. And I still believe the idea to make Tatum’s jock the outcast and make Hill’s dork the popular kid was a stroke of genius. That said, this film just barely made the cut into my top ten. There were a LOT of good films in 2012!

9.) The Avengers: What I said in October still holds true: “It might not necessarily be Oscar-worthy, but this epic superhero film is pretty much everything you could ask for out of a popcorn flick. It’s fun, exciting, dramatic, bombastic…I could go on and on. The culmination of Marvel’s efforts to create an interweaving world for their characters on the big screen is a rousing success. The bantering between Robert Downey, Jr.’s Tony Stark and Mark Ruffalo’s Bruce Banner is worth the price of admission alone. It only drops down some spots because repeat viewings at home have caused me to start picking out some plot-holes, and the realization that the first 20 minutes isn’t necessarily a master class in acting.” Bottom line? This was a helluva lot of fun to watch in the theatre and it still is at home. Isn’t that what movies are supposed to be? Fun?

8.) Silver Linings Playbook: As time has passed, I’ve realized that this movie is a little more uneven at times that I originally thought while watching, but it’s not nearly uneven enough for me to leave it off this list. Jennifer Lawrence, Bradley Cooper and Robert De Niro give outstanding performances that I’ll want to watch time and time again. They’re all equally funny, sad and scary in their depictions of mental illness and their reliance on the people they love. Jennifer Lawrence has some competition when it comes time for the Best Actress category in this year's Academy Awards, but I'll be legit upset if she doesn't win. Don't be surprised if she ends up being the best actress of her generation.

7.) The Perks of Being a Wallflower: A movie that is not getting nearly enough love on the national level, The Perks of Being a Wallflower still remains in the back of my mind as a movie that we need to buy as soon as it’s available on Blu-ray/DVD. This movie had a big impact on me while watching it. Superb acting turns by Logan Lerman, Emma Watson and Ezra Miller made me totally invested in their plights, I loved how director Stephen Chbosky was able to bring the novel he himself wrote to life in exactly the way I imagine he wanted to, and how he made me care about his characters. It’s the kind of film that depicts realistic high school characters and makes you wish you were friends with them in real life.

6.) The Dark Knight Rises: Again, the final chapter in Christopher Nolan’s Dark Knight Trilogy isn’t a perfect movie, but I still found it to be the perfect ending to his take on Gotham. Christian Bale gives his best performance in the series, Tom Hardy’s Bale is a villain who is more than able to match Batman mano-a-mano (and I STILL love his voice), Anne Hathaway was perfect as Selina Kyle and Joseph Gordon-Levitt’s presence as a mirror image of Bruce Wayne helped bring the series full circle. Every time I watch the movie I end up with smile on my face, and with TDKR on Blu-ray/DVD now, the behind the scenes extras make me only appreciate it even more.

5.) Argo: The movie that announced to the world that Ben Affleck is one of the best current directors working today and it’s for real. A taut political thriller about the secret CIA mission to exfiltrate a group of American embassy workers in Tehran in 1979, Affleck manages to turn a real-life story where the end outcome is already known into a film that had me tense the entire way through. Affleck also leads a great cast with Alan Arkin, John Goodman, Scoot McNairy and more making this a fantastic ensemble flick.

4.) Django Unchained: Quentin Tarantino’s take on the Spaghetti Western is just a damn, bloody-good time at the movie theatre. Performances by Jamie Foxx, Christoph Waltz and Leonardo DiCaprio that can only be described as awesome lead the way, but it’s QT’s dialogue that the actors exchange that make the movie. Django Unchained is Tarantino’s most linear film to date, but the fact that it’s split into about four different acts/vignettes, along with the violence, dialogue and film history homages throughout, make this a quintessential Tarantino film and one of the most fun times we had the theatre in 2012.

2.) Skyfall: If you read our site during the November when we did our 7 Days of 007, or if you even read our review of Skyfall when we posted it, you’ll know I’m a huge James Bond fan. But don’t think that means I’m being totally biased here – Skyfall, without a doubt, is the best acted Bond film in history with Oscar-worthy performances by Judi Dench and Javier Bardem, plus a strong performance by Daniel Craig in his best Bond turn yet. Directed smoothly by Sam Mendes, it’s also one of the most gorgeous films of the year thanks to Roger Deakins’ cinematography, the music is up for discussion as the best in the series, and numerous nods to the series’ history make this Bond fan smile every time. Skyfall, through and through, is a top-notch action film that looks at the fragility of 007 and his relationship with the ultimate Bond girl, which puts it just shy of my top spot for 2012.

1.) Looper: I just can’t get this movie out of my head! Ever since we first saw it, I’ve thought about this fantastic sci-fi story of time travel, redemption love and having to make tough choices. The first half is an eye-popping futuristic crime drama, and then halfway through it turns into something even better. Great performances by Joseph Gordon-Levitt, Bruce Willis, Emily Blunt and Pierce Gagnon lead the way, but it’s the script, cinematography, music and attention to details that I especially love. That’s why I have it listed as my top film of 2012.

Sarah: And now it's my turn. My turn to throughly bash some of the worst movies that I have ever had the displeasure to sit through. And believe you me, there were some doozies this past year.

5. Beasts of the Southern Wild: I'm confused. Am I supposed to feel like a complete idiot when I leave the theatre? I consider myself a fairly intelligent human being. I went to college, heck, I'm even FROM the South and I just didn't quite get the symbolism behind this one. It was whimsical and startlingly raw at times but that was about it. The story seemed to have no plot whatsoever and just left me feeling vaguely sad and extremely bored.

4. John Carter: Bad form Disney. This bloated production with a horribly weak cast was pitiful. I wanted it to be good. I really did! I love me some good sci-fi action and scenery but this just flopped. Apparently I wasn't the only one who thought this too seeing as it didn't even make back what it spent. Ouch.

3. The Lorax: This story has some nostalgia for me. We watched the original animated movie in my favorite science teacher's class in high school when we were talking about the environment. It's a cute story. But when you put Danny DeVito behind the little orange guy with the dashing mustache, it just really lost me. Zac Efron and Taylor Swift didn't do anything to help matters either. And I found myself watching a warped version of the classic Seuss tale. Not a fan.

2. That's My Boy: God-awful. There is nothing more to say than that.

1. Cosmopolis: I do not like to be talked down to. I am a smart person (see above for reference) and this movie did nothing but make me feel like an intellectual dud for 90 minutes. I was appalled at the pacing, the acting, the script, everything in this movie. It was written by snobs, for snobs. I can see them now sipping brandy with their monocles laughing at Robert Pattinson's watching-paint-dry performance.
Posted by Two Tickets For... at 12:15 PM

Email ThisBlogThis!Share to TwitterShare to FacebookShare to Pinterest
Labels: 21 Jump Street, Argo, Django Unchained, Looper, Silver Linings Playbook, Skyfall, The Avengers, The Cabin in the Woods, The Dark Knight Rises, The Perks of Being a Wallflower, Top Ten Movies of 2012