No Need To Break Open Your Wallet For This January Snoozer: Our Review of "Broken City" (2013) 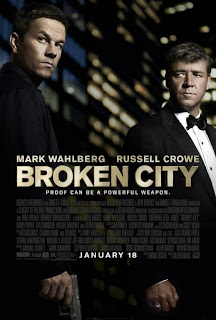 Directed By: Allen Hughes (The Book of Eli)

Rating: R for pervasive language, some sexual content and violence

Synopsis: Seven years after being forced to retire allegedly shooting an unarmed suspect, former NYPD detective Billy Taggert (Wahlberg) is hired by NYC mayor Nick Hostetler (Crowe) to investigate his wife (Zeta-Jones) and find out who she's cheating on him with. But when things go south, Taggert finds himself caught up in city politics and something more than just a cheating spouse.

Andrew: Hello readers! So just the other night we joined the throngs of people hitting up the movie theatre on a Saturday night to catch a showing of the new Mark Wahlberg thriller Broken City. I can’t really say this is one we’ve been looking forward to seeing…

Sarah: No, I wouldn’t say that at all actually.

A: But it’s more that we felt like it was our duty to see a new release this weekend.

S: And honestly it’s filled with actors who have historically done very well with the movies they’ve chosen.

A: For sure. It has Academy Award winners in Russell Crowe and Catherine Zeta-Jones to go along with Marky Mark…

S: Who has his moments…

A: Yeah, we can’t forget that he was nominated for an Oscar for The Departed, too. And then it has a pretty solid supporting cast with Jeffrey Wright (The Hunger Games: Catching Fire), Barry Pepper (True Grit) and Kyle Chandler (Zero Dark Thirty). So really a pretty good cast if you really look at it. It’s directed by Allen Hughes, who is one half of The Hughes Brothers who directed a person fav of mine in From Hell, as well as Dead Presidents and The Book of Eli. So it’s only one of the brothers this time, but still, not a bad pedigree behind it.


Again, not a film we were particularly looking forward to seeing, but it still intrigued us a bit. Now that we’ve seen it, what did you think of Broken City, Sarah?

S: Why don’t you go first? I always go first. What did you think of Broken City?

A: Well…I feel like there is a movie that’s actually worth watching somewhere in there. And sadly it only rears its head maybe ten percent of the movie. The rest of the time, I really don’t see why this movie was made or why any of the main actors took part it in other than to collect a paycheck.

S: That’s what blows my mind – that Russell Crowe and Catherine Zeta-Jones had anything to do with this movie. Broken City has “Mark Wahlberg movie” written all over it and not in a positive way. I just don’t understand…like, Mark Wahlberg is to bad action or thriller movies as Matthew McConaughey is to rom-coms.

A: Now, we didn’t see Wahlberg’s Contraband that came out last year, though we saw the trailer enough times that it felt like we did. I’d have to imagine Broken City is a perfect brother to Contraband because Mark Wahlberg does a really good job of playing Mark Wahlberg here.

S: Oh my gosh yes. I really did not like this movie. I agree with you that there’s a decent movie somewhere in there, but as a whole it fails miserably. The plot is confusing and actually pretty dumb, and it’s not at all what we were expecting.

A: Very true, the trailer is very misleading. The trailer makes it out to be a sexy thriller about Russell Crowe’s character, the mayor of New York City, blackmailing Wahlberg’s ex-cop, Billy Taggert, into doing some dirty work by surveilling on the mayor’s wife, finding out who she’s cheating on him with.

S: And that’s because Wahlberg’s character is a private investigator, so it’s kind of what he does anyway.

A: Right. But the trailer makes it out to be that this is primarily what the movie is about, except that’s not really what the movie is about. It’s more of a political thriller about some wheelings and dealings in New York politics, and specifically about the mayor’s up-coming election against a young whippersnapper played by Pepper, and what effect the large purchase of some projects are going to have on the election.

So to me, the movie goes back and forth between being about Taggert, a former cop who had to quit because of something he did while on the job…

S: Which is only loosely connected…

A: And his little business and his relationship with his girlfriend, then it goes between that and the political side with the two mayoral candidates, Crowe’s Mayor Hostetler and Pepper’s Jack Valliant, then it goes back to this thing with the projects…it just gets really convoluted.

S: If they had kept it simply a corrupt politics movie. If they had focused on Crowe and Pepper’s characters, I feel like this could have been a much better movie. Instead they focus on Taggert trying to get back at Crowe and “tag his ass.” It just turns into Taggert trying to get revenge even though Hostetler never really did anything wrong to him, per se. Taggert never really would have been found guilty of whatever it is that happens after he helps the mayor, like they lead you to believe.

A: Let’s talk about that real quick. Walhberg’s Taggert is a former drug and alcohol abuser who decides to go dry after an event that happens at the start of the movie, but there’s a scene later on where he falls off the wagon and goes on a mini-drunken rampage. In my opinion, the most interesting thing the movie could have done is delve into that aspect and what he’s really like when he’s been drinking.

S: But then in the middle of his bender he gets a phone call to come out to a crime scene and all of a sudden he’s instantly sober! Like it never happened!

A: Yes! This big plot point happens and all of a sudden he’s sober and can handle taking care of the situation, but the film takes a whole turn at this point and it’s just bad.

S: Here’s the thing: you were just saying you thought his falling off the wagon was interesting, but I didn’t find it interesting at all. First of all, there’s barely any backstory as to why he decided to go dry in the first place. We’re told he’s a recovering alcoholic, but that’s about it.

A: I just think it would have been a good chance to show us what Taggert used to be like. Cuz he picks a fight with some random dude and he’s throwing bottles at cars that are driving by, he’s just a mess. But then that’s all we ever see of it.

S: I hated it. I thought it was the worst scene in the whole film.

A: Fair, but to me that could have been an interesting scene if they had done it in a completely different way, but then the film basically says, “Oh never mind,” and he snaps back to being sober and helping out with an investigation.

S: I don’t know, maybe. I actually preferred the investigation scene after his bender. I wish they had done more with that, because Taggert starts doing some things in this apartment that a big scene takes place in, things that show the cop he used to be, and I thought that was more interesting. Like, why would Taggert know what the police commissioner would want him to do at this crime scene?

A: Again, there are these hints at a better movie, at getting to see what Taggert’s old character used to be like.

S: Yes! But there’s almost zero backstory, and what backstory there is is full of god-awful connections and full of characters that don’t even need to be in the movie. Then there are things like Taggert’s girlfriend is probably about my age and he’s pushing 40, and they go to this premier of an independent movie she starred in, which is just an awful scene…it’s just poorly done. Ugh. To me this movie felt like a bad low-budget film.

A: I wouldn’t say a bad low-budget film. It’s just a bad film.

S: Well it was like, if Mark Wahlberg looks longingly at his own reflection one more time I’m going to start punching him in the face!

A: Broken City is a movie about dirty city politics and police departments, and it’s just been done so much better before so many times, like Serpico. This movie had the pedigree acting-wise, but it has a terrible script, bad direction and bad editing…it just makes me think that Broken City was trying to be one of those great corruption movies, like how Gangster Squad was trying to be a good gangster movie, this film was aspiring to be one of those greats but falls way short and is instead, like you said, a bad movie.

S: Yup. There’s not a whole lot more to say other than it’s just not good. I also don’t think it helped that Wahlberg was the main character and they had the better actors just used in supporting roles.

A: I actually didn’t mind Wahlberg too much here. We joke that he does a great job of playing himself, but at least he did it somewhat well here. That said, Russell Crowe is not good here. Almost every single one of his lines is terrible, especially in the scene where Hostetler hires Taggert.

S: The debate between Hostetler and Valliant is completely outrageous and unbelievable. Catherine Zeta-Jones as Hostetler’s wife doesn’t do any better…we really could pick this movie apart all day long. Overall, it’s just a film that misses the mark.

A: There are a couple of things I liked about the movie though. I liked the relationship that Taggert has with his office assistant, Katy (played by Alona Tal). Their relationship is another one of those things that I think could have been a better part of another movie.

And while I thought individually they weren’t very good here, I actually liked the scenes where Russell Crowe and Catherine Zeta-Jones were together. They’re by far the best actors in the film, and while for the most part they’re pretty flat here, there’s an electricity that sparks up when they’re in a scene together.

S: But there were only like two or three of them.

A: True. The best scene in the movie, I thought, was early on in the film when they’re characters are getting dressed and ready for the day, and Hostetler comes up behind her while she’s putting jewelry on in the mirror and as they talk about her not promoting the election at some speech she gave, he has his hands kind of around her neck in a threatening way.

A: I think if the film had delved more into the darkness there, or the darkness really in any of the characters, it would have been much better off. As it is, it’s completely boring.

S: My biggest problem was that there was too much plot and not enough backstory into the main character. They only gave us bits and pieces of Taggert’s history and leave it up to us to either just take it as it is, or to piece them together and guess a bit.

It was just disappointing, but that’s what you get with January movies during awards season because the good movies in theatres are the ones that have come out already and are still being showcased. I’d say this is one you definitely don’t need to see in theatres…

A: Personally I feel like it’s one you don’t need to see at all.

S: Which is a shame because of the caliber of actors in it. It’s just…not good. Not good at all. Steer clear.