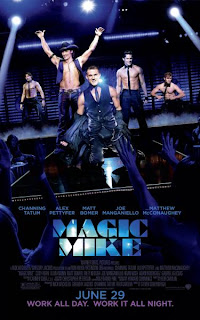 Synopsis: Mike (Tatum) is the star of a male strip-club in Tampa who is saving his money from doing manual labor day-jobs so he can own his own custom furniture business some day. One day at a work site he meets Adam (Pettyfer), a 19-year-old kid who seems aimless. When Mike takes Adam under his wing and gets him a job at the club, the two begin to have both positive and negative effects on each other’s lives, including Mike taking an interest in Adam’s sister, Brooke (Horn).

Sarah, we touched on this in our weekly preview, but thanks to the trailers and commercials for this film many, MANY women have been looking forward to it. So I first want to get your take on whether Magic Mike lived up to your expectations as a woman?

A: Why did the rest fall flat for you?

S: There was no storyline. No, there’s a loose storyline but it felt more like just a day-to-day thing, there wasn’t a whole lot of movement. Like time went by but there wasn’t much movement in any direction. I felt the girl they cast to play Brooke, Cody Horn (The Office), I felt like she did NOTHING for the movie. She wasn’t attractive, her acting sucked…it was painful to watch. It was like watching Kristen Stewart in the first Twilight film. I was not impressed with her at all.

Not quite sure why they casted her, because Channing Tatum in Hollywood gold right now and I think this one just didn’t do it for me. It had all the hot guys, didn’t have any real storyline involving the hot guys who are good actors! Like Matt Bomer (White Collar) and Joe Manganiello (True Blood)…I would have liked to have seen more character development, a better storyline…it was a little weak for me.

A: Well I’m going to disagree with you on some things here. Because I think this is an example of marketing the movie, not incorrectly, but more in a deceptive manner. Because they make it look like the film is all happy-fun-time, that it’s all about the guys dancing, and while the film has those moments and when they happen they’re pretty damn good even for a straight guy to watch, but this film is not at all what they’re marketing it out to be.

It’s not happy-fun-time the whole movie. What it is is almost a look into the realities of what the real life of a male stripper is. Like, why Mike does what he does, and the repercussions of it for both him and other people around him. I felt that the real gist of the movie is that Mike is trying to save up money to start his own business and it’s about the realities that he has to strip on the weekends to make end’s meet so he can save his day-job money for his business. Then he finds Adam, brings him in under his wing to join the revue and then it becomes how the two of them effect one another. Adam starts to have both a positive and a negative effect on Mike’s life, whereas Mike “improves” Adam’s life considerably. It’s really about how that relationship goes. It’s not what I expected at all but I liked that. I liked where the movie went and it was an interesting, introspective look into where Mike goes. Does he want to remain a 30-year-old stripper?

I don’t want to say what happens, but something does happen to Mike that the whole theatre just went. “Damn, that sucks.” And you feel real bad for him, and Tatum knocks it out of the park with his performance of this character arc. I just like where it went and it was unexpected because they marketed it as, “Come watch the beefcake, ladies! It’s all beefcake all the time!” And it wasn’t, and I liked that.

S: I guess I see where you’re coming from.

A: And there’s the meteoric rise that Adam has, and it’s the effect that has on Mike that I really enjoyed in this film.

S: Oh yeah, it’s very much like an apprentice and the master, right? And I agree, it did show the seedy underside of this very REAL industry world. Male strippers or female strippers, it’s not just about the sex. It’s not just about the bodies. It’s people trying to make a living. But I guess I just couldn’t quite get around…maybe the fact that I did feel a little duped. It didn’t bother me to the point where I was mad about it, but it did leave a sour taste in my mouth.

I did really like Matthew McConaughey as the club’s owner, Dallas, because he differed from his usual rom-com, almost simple Southern Boy style. I like that he played it almost more in the way he did in The Lincoln Lawyer. He’s actually a good actor, so I don’t know why he goes for those seemingly easy roles. Plus his character was one of the more fully fleshed out characters and was very exciting on the screen.

S: And then they had this character who isn’t mentioned in any of the trailers, Tarzan, who reminded me of Mickey Rourke in The Wrestler while we were watching it, and then it turned out he’s played by Kevin Nash, who really IS a professional wrestler. I thought he was awful in the film – if you watch him in the film, and you’re really not supposed to be focused on HIM during the dance scenes, but if you do notice him he doesn’t really do anything. It was painful to watch him because Nash has bad knees and couldn’t go all out every time. So I don’t know why they casted him.

I do wish they had marketed differently. I understand why they marketed it the way they did, HELLO! Duh! They’re going to make wicked money this first weekend because of women just wanting to see the men naked. But I do think that when it starts to leak out that it’s not that strong of a story…

A: But see, I do think there can be a bright side to where the film can get it’s cash grab this first weekend with all the women who go to see it, but then they can find out there’s more to it than just the beefcake. Soderbergh fans will recognize this film instantly.

S: What else has he done recently?

A: Lately he did Haywire with Gina Carano and Contagion with Matt Damon, he did all three Ocean’s movies…

S: So I guess I get the feel for his movies then.

A: He’s just a different filmmaker. It’s not just about the dancing, it’s looking into what the life of a dancer is. He kind of did that with a film called The Girlfriend Experience where he casted one of the biggest porn stars in the world, Sasha Grey, and made her the star where she played a prostitute. But the film wasn’t about the actual sex in being a prostitute, it wasn’t exploitative, it was about how does her career affect the rest of her life? What are the outside aspects of it? And I got a similar vibe from Magic Mike.

S: The ending is interesting and now I’m kind of thinking about the Ocean’s films and this is similar to how those films end. It just kind of cuts to black.

A: Yeah, but it still completed the journeys that Adam and Mike take. I actually love the last few shots. Again, I don’t want to say exactly what happens but the way they’re shot and the performances by the actors…I loved it. I particularly liked the last shot you see of Adam in the film. He just has this look on his face that you saw on Mike’s face at the beginning of the film.

S: I guess I understand, because if you really think about it, where else could they take it? That story was over. There really wasn’t anywhere else to take it.

A: And it wasn’t your prototypical ending. I like things like that. A couple quick things I want to add about why I liked this movie: I loved that there’s almost no real score. When music is used it’s generally in the natural environment of where the characters are, whether it’s the club or they’re in a car driving or at a party. Soderbergh doesn’t use music to elicit an emotion from you. If you feel an emotion it’s because of what’s happening on the screen.

Secondly I loved the way he shot the film. There are so many long, uninterrupted takes. They follow a guy around the room or just linger on a conversation, like Mike and Brooke’s conversation at the beach. I read somewhere that Tatum and Horn improvised everything in that scene, and that Soderbergh did that a lot in this film by giving the actors the general idea, saying here are your beats to hit…

A: Exactly. And that really came off the screen for me. Tatum’s not the greatest actor per se, he might seem like he’s having trouble saying his lines sometimes but this film felt very real. There’s a scene where he’s stuttering, trying to get out what he wants to say and it felt real because he probably WAS trying to get our what he wanted to say.

S: And I appreciate that part of him. His part did not bother me. I think he’s a good actor. I just think he has a stage presence and magnetism like a young Brad Pitt or young Tom Cruise. Like other actors who have been in the biz for a while, he just has that magnetism.

Now where scenes like that fell flat for me it was because of the other actor, Cody Horn. I just didn’t believe it, I felt it was forced.

A: I didn’t mind her. Could they have casted someone better? Like I liked the scenes with Olivia Munn…

S: Yeah, why couldn’t they have casted her as Brooke?

A: But I liked her role for what she was as a woman who uses Mike for booty-calls.

S: I mean…I think we’re gonna have to agree to disagree on this one.

A: True, but I think we can agree that Channing Tatum is a STAR. He was great in The Vow, he was hilarious in 21 Jump Street and I felt this is…

S: It’s just a different look at him. I would say see this one in theatres if you’re a woman. If you’re a guy, depends on your sexual preference or how secure you are in your masculinity.

A: Hey, and for the guys, this film IS an equal-opportunity film with the skin. It’s not just guys. Olivia Munn has a nude scene and some other girls do, too.

S: True. Ok, so overall I think you might disagree with me about us owning this someday…

A: No, I definitely think we should own it.

S: Just not the day it comes out necessarily. But it’s definitely one to see in theatres, ladies!