Katy Perry: Probably Better In Concert Than the Silver Screen: Sarah's Review of "Katy Perry: Part of Me" (2012) 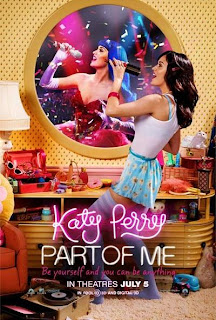 Synopsis: Documenting Katy Perry's rise from young gospel singer Katheryn Hudson to one of the world's biggest music stars, Katy Perry: Part of Me uses home footage and behind-the-scenes footage of her "California Dreams Tour" to present both the public and private side of Perry's life.

Sarah: Hello readers, Sarah here! We have come to one of those rare times when I went and saw a movie without Andrew. Considering the movie, I can't really fault him for it. So, a girlfriend and I went and saw Katy Perry: Part of Me all by our lonesome! I have to say that I really enjoyed it! But for further details, Andrew and I are going to go the question/answer route on this review. Bring on the questions Andrew!

Andrew: My first question: would you consider this movie to be more of a concert film or a behind-the-scenes documentary-type film?

S: That's a tough one. I would have to say that it's more of a concert movie. She pretty much went through her entire tour and the sets she played in them. Those were then inter-spliced with behind-the-scenes footage. It was an interesting progression of footage.

A: Can you explain what you mean by "interesting progression of footage?" That intrigues me.

S: Well this was the documentation of a yearlong tour, so when it started Katy was excited and very hands-on. That actually never changed. But as it went on and she was trying to keep the energy up for every show around the world AND keep a marriage together, we started to see the toll it was taking on her. It was exhausting just to watch.

A: How far into her relationship with Russell Brand did it get? Did it show much of the deterioration between them?

S: It did a little bit. It definitely showed her in the positive light and him in the negative, which obviously made sense. When she would have a day or two off, she would automatically jump on a plane and fly to wherever he was - no matter if she was in Europe and he was in L.A. He apparently never came to her. How exhausting would that be?!

It was actually pretty sad. There is footage from when they did finally separate and divorce and they did a great job at tugging at the audience's heartstrings.

A: Tugging at the heartstrings, that brings me to my next question: in your opinion did this film come off more as a true representation of what Perry's career and life is, or more of a promotional movie that maybe shied away from putting Katy in any sort of negative light? Basically, did the movie feel fake at all?

S: I definitely feel like this was a promotional video but I don't think that it was fake. I actually find that when Katy gives interviews, she sounds pretty fake. That was not the case in this movie. But I will say that after the movie was over, we wanted to go to a Katy Perry concert, and I think that was the point of the movie too. It’s quite smart in my opinion.

S: No, everything was in 3D and it was pretty good. We also saw it on a film projector so it was kind of lacking on that point, but oh well. All in all, this was a fun movie to see in the theatres. It gets you pumped up with Katy Perry music and is definitely a chick flick.

It’s a fun movie to watch, but based purely from the standpoint of grading it as a quality movie, I give it a …