Andrew: Hello readers! We're doing a little something different this week in lieu of a weekly preview, since The Amazing Spider-Man and Savages are two of the big three coming out this weekend and we've already review them (click on their titles to read our reviews if you'd like).

So, with that in mind and seeing as this year is already halfway over, both Sarah and I are going to post our respective Top Ten Films (So Far) of 2012! The only criteria being that they had to be films we've actually seen and reviewed (so our apologies for not having something like Moonrise Kingdom on our lists) and they had to be films that were first released in theatres for public consumption in the United States in the year 2012.

Without further ado, here are our lists! 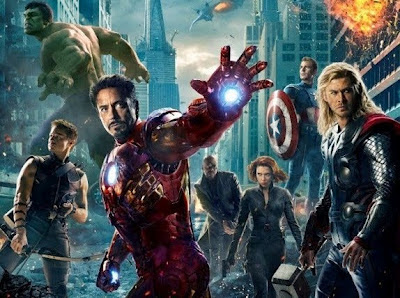 
1.) The Avengers: This movie was everything a superhero movie should have been. The action paired with a phenomenal cast shot this movie to #1 for many weeks in a row. This was such a fun movie to go to and it fed into the other Marvel movies so seamlessly. I'm excited to see where the next Iron Man and Thor movies pick up from here! (Our 5/5 review)
2.) Prometheus: This epic film satisfied my need for another Alien movie. While it was not exactly a "prequel" it was still so cool and had a great cast that really brought the world that Sigourney Weaver’s Ripley would later inhabit to life. (Our 4.5/5 review)
3.) Savages: I really don't know why I loved this movie so much. It was sexy and violent. This probably speaks a little more about me that any of you cared to know, but there it is. I thought that the relationship between Ben, Chon and Ophelia was very interesting and I also enjoyed the directing style Oliver Stone went with. (Our 3/5 review)
4.) Madagascar 3: Europe's Most Wanted: I love these movies. I don't care that I'm a 23-year-old woman, these movies are hilarious. And this one was just a great addition to the wayward zoo animal collection. (Our 4/5 review)
5.) Ted: Hilarious. Seth MacFarlane. Mark Wahlberg. Most of the cast from Family Guy. Nuf said. (Our 4.5/5 review)
6.) Rock of Ages: I am also a big fan of musicals. It could be because I sang in high school and was in a couple of musicals. It could also be because my husband has gotten me turned on to 80s rock music. Whatever the reason, this movie took me back to a time that I wish I remembered and could have grown up through. Tom Cruise rocked as rock god Stacee Jaxx and could make any woman swoon in the theatre! (Our 4/5 review)
7.) Magic Mike: While I wasn't as big of a fan of this  movie as Andrew was, I do think that Channing Tatum is a force to be reckoned with in Hollywood. He started out as a beefcake dancer in Step Up and has quickly turned into a heavy-hitter in comedies and dramas alike. (Our 3.5/5 review)
8.) The Hunger Games: I liked these books. I usually then have a hard time seeing the movies without being overly critical. It's probably not fair but that's the way it is. This movie however kept incredibly close to the books while still putting a cinematic spin on things. It makes me hopeful for the next 2 movies! (Our 4.5/5 review)
9.) 21 Jump Street: Another Channing Tatum movie that featured some great action scenes and hilarity. This remake of a classic 80s TV show was so entertaining and funny! (Our 4.5/5 review)
10.) Chronicle: "Found footage" movies are not my usual cup of tea but for some reason this film did it for me. It was an interesting character study and overall was pretty awesome. (Our 4.5/5 review)


1.) The Avengers: It might not necessarily be Oscar-worthy, but this epic superhero film is pretty much everything you could ask for out of a popcorn flick. It’s fun, exciting, dramatic, bombastic…I could go on and on. The culmination of Marvel’s efforts to create an interweaving world for their characters on the big screen is a rousing success. The bantering between Robert Downey, Jr.’s Tony Stark and Mark Ruffalo’s Bruce Banner is worth the price of admission alone.

2.) The Cabin in the Woods: My favorite film genre is horror, so this “loving hate letter” to the genre by Joss Whedon and Drew Goddard is pitch-perfect. The best deconstruction of horror films since Wes Craven’s Scream, I genuinely enjoyed every aspect of this movie. Bradley Whitford and Richard Jenkins are a hoot, the group of stock characters that are knocked off one-by-one nail their parts, and it’s a legitimate slasher film. And I can’t forget to mention the whiteboard. (Our 5/5 review)
3.) 21 Jump Street: The best studio comedy of the year would have had me rolling in the aisle if we weren’t sitting in the middle of the row. Channing Tatum and Jonah Hill are perfect together, and who knew Tatum was this good at comedy? There hasn’t been an R-rated buddy cop movie this good in a long time, so this was a refreshing change of pace. It was also refreshing to see them flip the script and make Tatum’s “jock” the outcast and Hill’s “dork” one of the popular kids.
4.) Seeking a Friend for the End of the World: Led by another great performance by Steve Carell and his surprisingly good chemistry with Keira Knightley, this dark comedy caught me off guard by making me really think about what I would do if I knew the world was ending in 3 weeks. The realistic portrayals throughout the entire movie made the proceedings easy to relate to. A fantastic effort all around to make you care even though you know where the film is headed. (Our 4.5/5 review)
5.) Sound of My Voice: This film had a great mystery to it that kept you wondering and thinking even after it ended. It’s helped by its atmosphere and the performances by Brit Marling and Christopher Denham. I loved going down the rabbit hole into the cult the two main characters, Peter and Lorna, try to infiltrate and expose as a fraud. A small budget sci-fi film with strong performances and a stronger story are always appreciated, but it's the staying power the gives it such a high ranking for me. (Our 4/5 review)
6.) The Hunger Games: A near perfect adaptation of Suzanne Collin’s novel led by a killer performance (no pun intended) by Jennifer Lawrence, it’s obvious the director Gary Ross cared very much about the source material and wanted to stay faithful to it. Yes he trimmed and/or added some things, but it made for a great action film, and if your reaction to the people in the Capitol was disgust, well then Ross did his job perfectly. It’s a real shame he won’t be coming back for Catching Fire.
7.) Prometheus: I may be in a minority, but I was able to look over some of the flaws in Ridley Scott’s Alien prequel and see it for what it is: a very good sci-fi/horror film in its own right. It was tense and atmospheric if not scary; had some good performances, particularly from Michael Fassbender; and it’s the best use of 3D I’ve personally seen since Avatar. Was it perfect? No, but I didn’t have untouchable expectations for it either, so I thoroughly enjoyed it.
8.) Chronicle: A great twist on the superhero origin and one of the best uses of the “found footage” genre, this film was a pleasant surprise. Strong performances by all the lead actors, strong writing that made me invested in the proceedings, and great directing by Josh Trank made this an all-around solid movie. I particularly liked the gimmick of having the characters use their telekinetic powers to float the camera around them so they could all be in the shot. Just a gem of a movie that shined brightest during the usually craptastic February releases.
9.) Ted: The second-funniest movie that we’ve seen this year, Seth MacFarlane’s feature film directorial debut is VERY similar to his show Family Guy. We happen to love Family Guy, so we appreciated the humor here. Is it deep? Of course not. But it’s raunchy and offensive as hell, and most of it comes out of an amazing CGI animated teddy bear. The all-in performance by Mark Wahlberg is just the cherry on top.
10.) The Vow: Surprised I included a chick-flick in the top ten? If you read our review you shouldn’t be. Channing Tatum’s performance as a husband who has to deal with his wife’s amnesia and not remembering their live together at all absolutely killed me. Rachel McAdams nailed her role as the amnesiac wife, so the pairing of the two just created a relationship that got me hook, line and sinker. (Our 4/5 review)
(Honorable Mention goes to Rock of Ages. It was thiiiiiiissss close to beating The Vow.)
Let us know what you think of our lists! We'd love to hear what our readers' Top Ten films of the year so far are!

Photo Courtesy: Teaser-Trailer
Posted by Two Tickets For... at 2:13 PM

Email ThisBlogThis!Share to TwitterShare to FacebookShare to Pinterest
Labels: 21 Jump Street, Chronicle, Madagascar 3, Magic Mike, Prometheus, Rock of Ages, Savages, Sound of my Voice, Ted, The Avengers, The Cabin in the Woods, The Hunger Games, The Vow