These Guys Are Setting the Bar Real High For the Rest of Us: Our Review of "Savages" (2012) 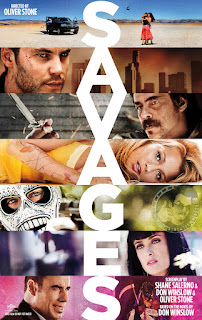 Rating: R for strong brutal and grisly violence, nudity, some graphic sexuality, drug use and language throughout

Synopsis: Ben (Johnson) and Chon (Kitsch) are best friends who grow the best marijuana in the world. When they refuse to partner up with a Mexican drug cartel led by Elena Sanchez (Hayek), the cartel kidnaps the girlfriend the two guys love and share, Ophelia (Lively). Determined to do anything to get her back, Ben and Chon go on a rampage to bring down Elena and save the love of their lives.

Sarah, this is a film we haven’t had the chance to preview yet because it doesn’t come out until this Friday. But we’ve seen the trailer plenty of times and it’s always seemed to be one we were on the fence about, especially you. What do you think now that we’ve seen it?

Sarah: Oh yeah, it was nice. I would say I had about zero expectations for this film. I thought the trailer was poorly done, it made it seem cheesy and it was just kind of like, “Ugh, another drug cartel movie.” But – and this might be because of my low expectations – I was extremely, pleasantly surprised by Savages. I actually really enjoyed it.

S: It wasn’t what I expected. I’m going to say it was the best movie I’ve ever seen Taylor Kitsch in, which isn’t saying much, but I also thought Aaron Johnson did a fantastic job. In the trailer it sort of seems like Blake Lively is the main character, but she’s really not. I mean she has a role, but her role is…

A: She’s more of the narrator and almost the plot device for the film. The MacGuffin, if you will.

S: She doesn’t have a TON of lines and her character development isn’t great. It’s there, but it’s not too deep. It’s not like she’s the main focus. She is, but she isn’t. That’s what’s confusing.

A: I think the focus was spread out well enough amongst all the main players.

S: But I was just really impressed. I really enjoyed the movie. It wasn’t just pure violence. There was a lot of violence, don’t get us wrong, but it wasn’t a constant barrage of grisly violence.

A: It was used to good effect.

S: Yes, it was used to drive points home. I actually really, really enjoyed this movie!

A: You touched on it, but for me the bright spot of Savages is the two lead actors in Kitsch and Johnson as Chon and Ben. I think they were a good ying and yang. I agree, of the three movies Kitsch has been in this year (John Carter and Battleship being the other two) this is the best one he’s been in and I think it’s the one he’s fit the role he was cast in the best.

S: Kind of a beefcake, jarhead…

A: Jarhead is a good term, because his character, Chon, is an ex-Navy Seal who came back from the war in the Middle East a lot more grizzled and rough. I think for the way his voice sounds and the intensity he can give, he was great as Chon.

And Aaron Johnson on the contrast has always been sort of soft. His voice is soft, his features are soft, he has these baby blue eyes. There’s a scene early on where his character, the brains of the marijuana operation Ben and Chon run, is overseas doing volunteer work and he just looks perfect as that sort of “love and peace” sort of guy. I could see Johnson actually doing that.

S: And it could have been the way they styled him for the movie, he has these dreads and some scruff on his face…

A: Yeah, but I think a lot of it has to do with his demeanor and eyes. They casted him very well, and when the stuff that goes down later in the film happens, it felt natural that his character would be very uneasy with the violence as opposed to Chon.

S: I felt that’s where both of their characters really shined. When Ben has to kill someone for the first time and just the internal anguish he has…really you see Chon become a bit softer toward him because of the bond the two share. He’s incredibly supportive and loving. Like, “We gotta go, you gotta do it. I understand what you’re going through.” It was really well done.

A: Yeah, and I liked Lively.

A: I’m curious, because I’ve read that Jennifer Lawrence (The Hunger Games) was originally supposed to play that role, and I wonder how different it would have been with her as O.

I loved Selma Hayek as Elena, the leader of the Mexican drug cartel that wants to partner up with Ben and Chon but ends up kidnapping O. Hayek just chews up the scenery and I love her accent. She was perfect. Benicio del Toro was just as great as her seedy right-hand man.

S: Oh he was terrifying!

A: He’s just always fun! I love him in The Usual Suspects and Fear and Loathing in Las Vegas. He’s great. John Travolta didn’t bring a whole lot to the table.

S: Yes, I’d say of all the characters his was the most expendable. He brings a Saturday Night Fever feel to this movie, for me at least, and this wasn’t a corny movie whatsoever but he brings an element of corniness to it.

A: I felt he fit well as the slimy DEA agent who is playing both sides and is really only in it for his own interests.

S: Yeah but he could have easily been replaced by another actor.

A: Agreed. He was fine he didn’t bring much to the table in the greater scheme of things.

My main complaint with Savages is that it takes a while to get to the real meat of the story and I wish they had trimmed it up to get there sooner. Stone lingers too long on the relationship between Chon, Ben and Ophelia, showing the different kinds of sex O has with the two guys…

S: Yeah, the beginning gets real close to being a Skinemax movie than anything!

A: To me it was just like, “Ok, we get it, the guys are different kinds of lovers.” So once things actually kicked in and O got kidnapped I really got into the groove of the movie. I think they could have tightened it up a bit.

S: It’s a little talky at times, which is a nice respite between the violent scenes, which I enjoyed. But it is a little slow at times. It’s a long movie at two hours and ten minutes runtime. For being an action movie it’s a little long. Some of the scenes when O is captured I felt could have been snipped.

A: So here’s my last talking point I wanted to touch on: what did you think of the ending? (POSSIBLE SPOILER ALERT FROM HERE ON OUT!)

S: Ok, yes. This movie has two endings. The first ending is very romanticized. It’s a very romantic ending. The second ending is…

S: Well they both are.

A: But I mean with how the second ending really goes down, I just felt like that was probably more realistic in terms of what would actually happen. It wasn’t a happy ending per se…

S: But it was romantic. But it’s not a shocker ending either. It felt more natural. Let me say that I would have been happy had they just stuck with the first ending.

A: I guess I would have, too, because not unlike Seeking a Friend For the End of the World, I like it when movies don’t necessarily have happy endings.

A: Me neither. But so in my summation, I really enjoyed the middle part of the movie, the meat of the movie after O gets kidnapped to the final standoff. I’m not so hot on the first act and the ending. I liked it, but I’m glad we got to see it for free. I don’t feel it’s one you need to see in theatres.

S: No, it’s not. But it MIGHT be one I own one day. And I mean I’ll personally buy it, because our collection is a mixture of the two of us. But I enjoy movies that entertain me and Savages did that.