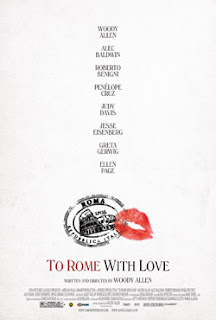 Rating: R for some sexual references

Synopsis: Set in city of Rome, Woody Allen interweaves the stories of many different people – from a retired music director and his newest discovery to a young Italian couple who lose each other in the city and more.

Andrew: Hello readers! Sarah and I made the trip down the street to our movie theatre and caught Woody Allen’s latest film, To Rome With Love. Much like Allen's 2011 hit Midnight in Paris, To Rome With Love is another film with an ensemble comedy that takes place in a large European city. So a lot of similarities between the two.

This was not a film we previewed since we didn’t do a preview this week (it’s been incredibly busy at work for the two of us), it’s been in limited release in North America for a few weeks but only went wide just this week, and it’s one of the rare movies that we went in to see that I had absolutely no idea what it was about (not unlike Midnight in Paris, actually).

You knew a little bit more about it than I did because you had seen the trailer and some of the actors on talk shows.

Sarah: I did but the previews were pretty misleading. I expected it to be mainly focused on Alec Baldwin (30 Rock), Jesse Eisenberg (The Social Network), Ellen Page (Juno), Woody Allen…I expected it to focus on them because that’s what the trailer showed.

But it actually focused more on the Italian actors in the movie, at least I thought so. It’s very much an Italian movie, very much a European movie. I got this feeling that it American audiences were the secondary audience in mind for Allen. Just the flow of it, the look of it…I guess that’s the best way for me to describe it.

A: I guess I don’t fully understand why you’re saying that though.

S: It’s kind of avant-garde. To me…it didn’t have a lot of similarities with Midnight in Paris. It didn’t have much of a general storyline. There were five different subplots going on at the same time…

A: Well before we get any further, let’s go through those five threads, then get into out take on them. (Fair warning, this might get a little confusing.)

The first one we are introduced to is Hayley and Michaelangelo, an American tourist and an Italian lawyer, who meet cute and fall in love. They get engaged, so her parents (played by Woody Allen and Judy Davis (Marie Antoinette) fly to Rome to meet Michaelangelo and his family. Hayley’s father, Jerry, is a reluctantly retired music executive. As it turns out Michaelangelo’s father, Giancarlo, is a GREAT opera singer…but only when he’s in the shower. (Giancarlo is played by the famous Italian tenor Fabio Armiliato). So that vignette actually revolves around Jerry trying to make Giancarlo share his talents.

S: And John really becomes Jack’s…what would he be? His adviser?

A: John basically becomes Jack’s conscience. And it confused us because it really becomes JACK’S story where he lives with his girlfriend, Sally, and Sally invites her friend Monica  (Page) to stay with them for a while, even though Sally knows all men seem to fall for her. So while Jack tells Sally he won’t fall for her friend, John is always there to cut through the b.s. and tell him what he truly knows deep inside, pointing out all of Monica’s negatives that Jack is blind to. We’ll get back to this one.

S: Then we have the young newlywed Italian couple, Antonio and Milly. They’re visiting Rome because Antonio’s uncles have offered him a big job and he’s to meet all their business partners. But when Milly leaves the hotel to get a quick haircut, their stories split into two different paths.

While Milly’s out, a high-priced escort named Anna, played by Penelope Cruz (Vicky Christina Barcelona), shows up at Antonio’s hotel room, his aunts and uncles show up all of a sudden, and in a case of mistaken identity he pretends that Anna is his wife. Hijinks ensue.

A: On the flip side, after Milly loses her cell phone in a sewer grate and can’t find the hotel again, she stumbles across a movie set and meets her favorite actor, the fictional Luca Salta, with whom she goes to HIS hotel room and fights the urge to sleep with a famous actor. Hijinks also ensue there.

S: And it was funny to see Penelope Cruz in a role like this. You have these two unknown Italian actors and in-between them is this Hollywood superstar. The balance of it was quite funny.

A: It really was. The final subplot involved Robert Benigni (Life Is Beautiful) as Leopoldo Pisanello…

S: Who is a middle-class nobody.

A: He’s a self-proclaimed schmuck.

S: And all of a sudden he’s super famous and he has no idea why.

A: There’s paparazzi following him around, reporters constantly asking him inane questions about what he ate for breakfast that morning…and it’s all very humorous but also very surreal. He literally has no idea why he’s famous. So those are the five storylines, and really they have NOTHING to do with one another.

S: Which is strange. It’s not like New Year’s Eve or Valentine’s Day where everyone’s related somehow. Instead the narrative just bounces between the five stories.

S: It’s very fantastical, I was JUST going to say that. Especially Benigni’s storyline where his Leopoldo is famous all of a sudden and has no idea why and EVERYONE around him believes him to be famous, too.

A: A lot of the time we had no idea what was going on in this movie or why it was going on. Alec Baldwin…there are scenes where he’s in the scene with Eisenberg and Page and they’re both talking to him and he’s talking to them, but is his character there? Is he not really there? And then at the end, he and Eisenberg have a final exchange, go their separate ways and the camera follows Baldwin! And it’s like, “Well was he really there that time?”

To me the similarities between Allen’s last two movies are that their very fantastical, to the point where with this film we asked each other if the characters were all dreaming.

S: We did. And they never explain what’s going on. So in that respect yes, it was a lot of like Midnight in Paris. I just didn’t feel like this one had a central storyline and I suppose that’s because it didn’t.

A: And each story had some sort of commentary going on with it, a criticism of something. Most notably to me, one that made me laugh and I think I was the only one in theatre who laughed when I realized it, but at one point Leopoldo asks his chauffeur, “WHY am I famous?” And the chauffeur replies (and I’m paraphrasing here), “You’re famous because you’re famous.”

And at that moment it clicked for me that Leopoldo’s storyline is Woody Allen kind of critiquing people like Paris Hilton and Kim Kardashian, socialites and reality TV stars like that…

S: Who are mainly famous for being famous. I got ya.

A: Exactly. I think that’s what his story was a critique on and there are others like that in this film as well.

S: I will say…my favorite character in this movie was Woody Allen’s Jerry. He was so funny…

A: Oh man, he was annoying me at the beginning with his neuroses.

S: That’s what I found so hilarious! He was this little nerdy dad, which I know is his shtick, but it totally worked for me. But each character had their own special personality that was really quite clever of Allen. I applaud him for that.

A: Yeah, it was great casting, the script was good but at times I thought characters might have rambled or Allen held a shot too long, but overall I liked the storylines. And you mentioned her earlier, I really liked Cruz. She was very funny, especially when she and Antonio are taken to meet all his uncle’s business partners and they end up all recognizing her.

Much like Midnight in Paris I liked the music a lot but I wasn’t a huge fan of how Allen shot the movie.

S: I mentioned at the end of the movie, and I don’t know if you’ll agree with me, but this is another movie that seemed very much like a stage performance. There’s a narrator at the beginning and end, which was odd but felt a lot like a play to me. Then you have the visual of Alec Baldwin’s John being Jack’s conscience, sitting off to the side all the time but it’s like he’s not really there? That’s a very visual thing that would translate well to stage. There’s a lot of scenery so it might be tough to completely visualize this film on stage…

A: And you might have to streamline or cut out a couple of the storylines so you’re not bouncing back and forth so much, but I see what you mean now.

S: All this said, I’m not necessarily sure I liked the movie all that much. It’s not a movie that I would just pop in on a Friday night. But it was certainly entertaining. I’m glad we saw it.

A: I don’t think this will get any Oscar cred like Allen’s last film, it’s not quite as good, especially with the five storylines it got a little confusing at times and it probably ran a little long. But I’m still glad we saw it.