So Much Promise, Such Poor Execution: Our Review of "The Watch" (2012) 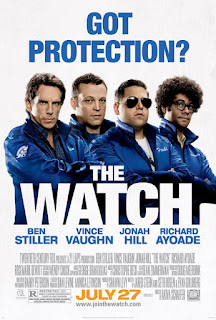 Synopsis: After the security guard of his store is brutally murdered one night, Evan (Stiller) decides to put together a neighborhood watch to catch the killer. He manages to get three guys to join him - Bob (Vaughn), who doesn't know how to deal with his teenage daughter; Franklin (Hill), a police academy reject with violent tendencies; and Jamarcus (Ayoade), a new neighbor who wants to make some friends. When the four of them discover an apparent alien invasion in town, they struggle to figure out how to stop it and to fix what's all wrong in their lives.

Andrew: Hello readers! We know it’s been about a week since our last review and for that we apologize. But the other night we caught a matinee of this past weekend’s new R-rated comedy The Watch, starring Ben Stiller, Vince Vaughn, Jonah Hill and Richard Ayoade. Directed by Akiva Schaffer – one third of The Lonely Island – and written by Seth Rogen and Evan Goldberg (who teamed together to write Superbad), this was one of only two new releases this week. In our preview I said I was pretty excited because of the pedigree behind it, but you were less than enthused to see it. Turns out you were right to be, eh?

Sarah: Yeah! I had very little enthusiasm for this movie. Great pedigree and I usually love the actors in it, but I just wasn’t excited about the storyline and it turns out I was right not to be. Because this movie was one of the dumbest movies we’ve seen this year, in my opinion.

A: I wouldn’t say it was one of the dumbest, but it was certainly disappointing and very uneven in the comedy department.

S: It was like they were trying to fit in science fiction with a your typical Ben Stiller or Vince Vaughn comedy and then shoehorn some family conflicts going on…I just didn’t get it. I didn’t understand why it was the way that it was, and I thought it was just generally bad. I was bored!

A: I could tell you were bored, you were really fidgeting during the whole movie!

A: And that’s the be fair because as you said it had different elements that it was trying to make work together and I think it was an example of where you have great ingredients but when your meal comes out of the oven it tastes terrible. The people putting The Watch together just couldn’t figure out the right way to make it all work. It wasn’t cohesive whatsoever.

S: Exactly. I wish that they had decided well ahead of time what they wanted the film to be. I actually wish it had been more of a sci-fi comedy. Which I guess it was, but it didn’t need the extra side stories and other crap going on. It did nothing for the film positively.

A: I think they should have completely embraced the sci-fi/alien invasion aspect. Not that The Watch ever hits a stride, but it’s best parts were at the beginning when the security guard at Evan’s CostCo is hunted down and it's a little more like a horror movie and was actually funny, too...

A: And then when you find out what’s really going on with the aliens in the last act, from then on out and it becomes more of an action film…they embraced the action in those parts and if it had been like that the entire time through it would have been…

I was not impressed. I was disappointed. You know, you don’t expect Stiller and Vaughn to play anything other than the straight guy and…

A: Whoa whoa, hold up. I disagree, because I think Stiller is at his best when he’s doing more zany characters like Derek Zoolander, Tugg Speedman or White Goodman; when he’s being more outlandish and he’s playing a character.

S: True. I guess what I was trying to say is I don’t find him funny WHEN he’s the straight man.

A: Agreed. This movie was a waste of his talents. I felt like he was really phoning this one in.

S: I felt they were ALL phoning it in. That’s why I wasn’t impressed.

A: The only one I felt wasn’t phoning it in was Richard Ayoade. He’s clearly the lesser known of the four leads but had a lot of quick, subtle one-liners or had reactions to the other guys that were the funniest parts.

There were plenty of scenes (such as the man cave scene after they find the silver ball that blows stuff up) where it seemed like Schaffer just pointed a camera at the guys, said "Go!" and they just riffed and you can totally tell. At least in those scenes Ayoade didn't try to outdo the others.

S: True. And maybe it’s because I’ve never seen him in anything else that maybe that’s what made his character fresh. I hear he’s really funny in other stuff so maybe we’ll see more of him after this.

I was disappointed because I really love Rogen and Goldberg’s other movies, so I was disappointed in their script. It just didn’t gel. And I tried to keep an open mind about it; I really do believe that I don’t want to become a movie snob and just automatically write something off if it’s poorly done. But this was just not a well-executed movie.

A: Like we said earlier, The Watch has the elements there and it could have been pulled together in a better fashion but they just dropped the ball. There ARE parts that made me laugh but there was never a legitimate belly laugh. It was a series of chuckles if anything.

A: That said, I can’t forget to mention my favorite aspect of the movie: Billy Crudup as Evan’s creepy neighbor (who, by the way, went uncredited as I just found out on IMDb). He wasn’t in ANY of the commercials or trailers. He plays a very creepy neighbor and every scene he was in made me laugh. I think part of that was because I had no idea he was going to be in the movie, and the other part is that Crudup was the one guy in the film who gave it his all. He TOTALLY played it creepy.

Oops, and Will Forte was pretty funny, too. Especially his first scene at the security guard’s murder scene. That was perfect.

S: Yeah, he was a bright spot. I thought the aliens were really cool!

A: They were totally legit! That was a great alien design, sort of reminiscent of the Predator design with the mandibles. They were scary and at times it looked like a dude in a suit…

S: And not in a bad way! We mean that more like it was a great makeup job. Total credit where credit is due. And if they were all just CGI effects, then they still looked good. But they looked real some of the times, making me think they weren’t all CGI. I wish we could have seen more of the aliens.

A: Yup! Ok, so what do we say overall about The Watch?

S: It was very uneven and you probably don’t need to see it ever.